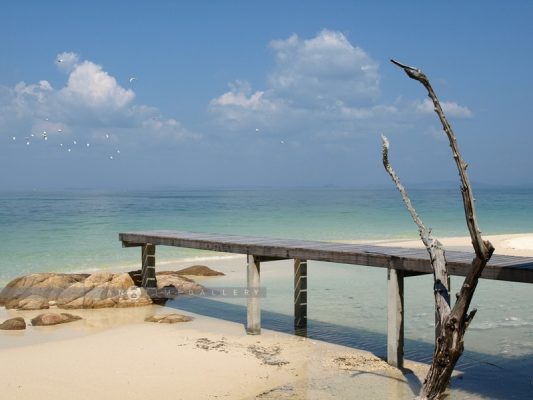 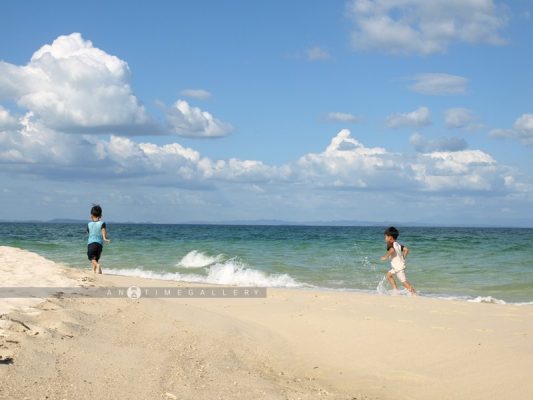 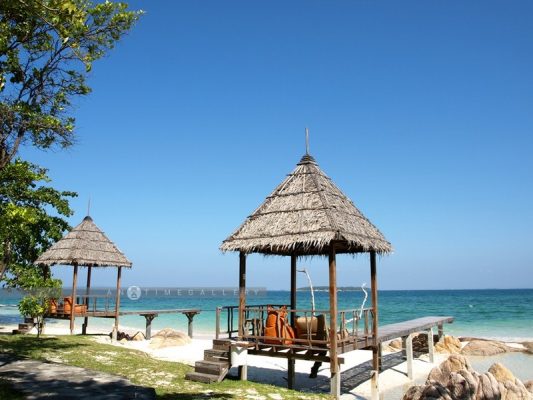 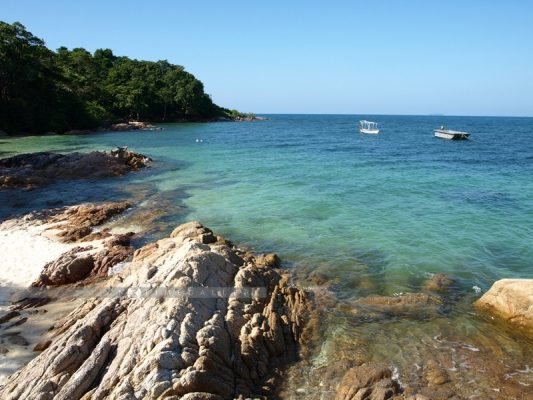 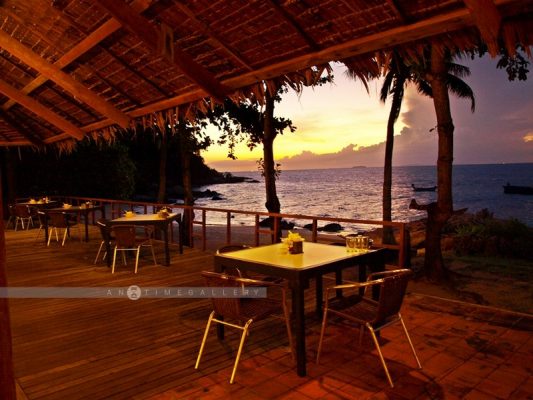 After staying with Rak and Rome at home for a week during his one-week prescheduled vacation leave, Dad could pressure Mum to take a 1-day leave on Monday for a flood evacuation trip to Munnork Island.

Since Mum could not take leave during the critical days (October 27th to 31st), we made a decision not to go to Krabi and headed to Rayong instead for our 3-day 2-night precious memories at this selected shelter without fridge, TV and without air-con during 9 am to 1 pm.

After two and a half hours in a car and 45 minutes on a boat, we finally arrived at the island of blue skies and sunshine. There were only 5 bungalows occupied on the day we checked in. Rak and Rome were only 2 children on the island. There were other 2 dogs accompanied by other 2 couples. We were the only one group who played on the beach and in the sea.

Munnork Island is a dog friendly resort. We brought Gateau and Bonbon here 7-8 years ago.  The sea was still crystal clear and the sand was still white and clean until Rak had to say out loud how clear the sea was. He asked Mum why this place was so clean.

Rak and Rome walked happily along the beach without sunblock and played there for 2 hours.

Our dinner was served at 6.30 pm which was quite late for Rak and Rome. They were so hungry and had to have some snacks we bought from the mainland.

One advantage of not having a fridge was that Dad and Mum did not have to be careful of what Rak and Rome would inspect. Normally, they like opening the fridge in a hotel room quite often.

Without TV or radio, the resort provided their guests with a book corner at the central area. Mum took 5 books to read. One of them was for Rak and Rome and it was a good bedtime story for them. After they fell asleep, Mum could finish one book on the first night. We woke up with full of energy for the second day.

The second day began with Ovaltine and boiled rice with shrimp, squid and fish. After finishing breakfast, Rome ran after peacocks, trying to poke them with a stick. He ran here and there and fell down many times. He got at least 5 scratches from this trip and also fell down from the bed when he was jumping on it.

During playing sand on the beach, Rome could concentrate on building a city according  to his imagination, which could last for 30 minutes. After that, he turned to his favourite play which was a sand war.  Dad and P’ Rak had to run away and asked Mum for help. Well, Mum was the only person who could stop Rome. Rome called Mum “Mae Mod” (Witch).

Rak has grown up a lot in terms of brotherly love given to Rome. This trip, Rak could help Dad and Mum to look after Rome. While they were playing sand together, Dad could walk along the beach to take photos, and Mum could concentrate on her reading and eating.

Once in a while, Rak called Mum to help him to stop Rome from destroying a sand castle. The most often used question Rak asked Rome was “Nong Rome, would you like to have vitamin C?” Then, Rome stopped immediately. It was a useful trick Mum taught Rak to do, instead of fighting with Rome.

After playing sand, we went swimming  in the sea. Kids still had a great time without swimming pool. Walking on soft sand in vast, infinite and free-shape sea water at Munnork Island gave us feelings of freedom and privacy at the same time.

The last morning, Mum could convince Dad to take Rak and Rome to walk around the island. Dad was afraid that Rak would complain about the hot weather and that Rome could not walk by himself. Mum insisted to try and volunteered to carry Rome in case Rome could not make it.

Finally we took 1 hour  from the start to the finish. Rak was so proud of himself. Rome walked by himself and did not want Dad or Mum to carry him. Mum was glad she made the right decision.

There was one part where we had to climb up and down the rock. The last part, we had to walk into the sea to get back to the beach at the finish point. This activity really fulfilled our unique and memorable trip.

In fact, without children, we should have finished our trekking within 30 minutes. However, we tried to take a break as many as possible because this was Rak‘s and Rome’s first time. Rak was a little bit worried about getting lost. He always looked for a wooden sign written “Walkway around the Island”. Luckily, there were so many signs along the way. Rak felt relieved every time he saw the sign. Rome kept asking why we had to stop because he preferred walking non-stop. However, he seemed to agree with our last stop and looked so tired. Look at his smile.

This was the longest stop, we were thirsty and hungry. There, we finished 2 bottles of water and 1 Pocky and many Do-So (Rice Cracker).

During this trip, we played in the sea 4 times, each time at a different location. The best one was when we had our last swim under a big tree. The sea was quite calm.

Here, we saw flying fish many times near a group of rock. There were many swings on the island but this was the only one that our feet could touch the sea water.

It was so obvious that the kids had a lot of fun here. Both Rak and Rome kept saying that the boat had left and we would not have a boat to go back to the mainland. They recommended that we should have stayed there one more night, waiting for the boat to come back on the following day. They had lingered for a while on the wooden bridge before we left.

Rak mentioned that he liked this trip the most, comparing to other trips we had together. Well, it was hard to believe because he always rates the latest trip the highest score.

As for Rome, he was too young to remember all the trips we made. He fell asleep in the boat both on the way to the island and on the way back to the mainland. Unfortunately, Rome missed a chance to see flying fish from the boat. 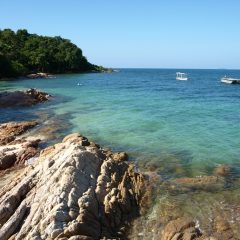 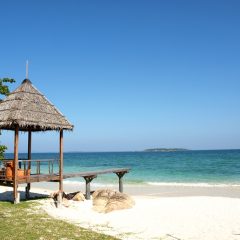 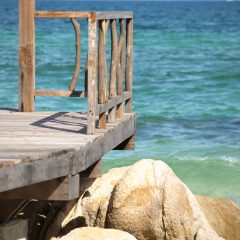 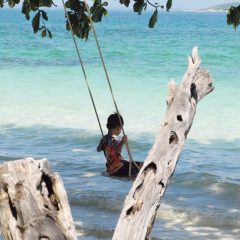 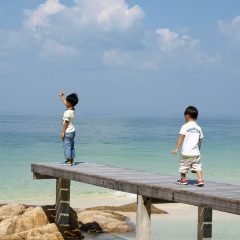 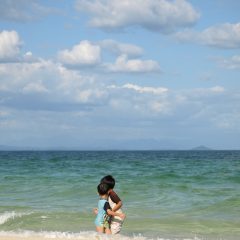 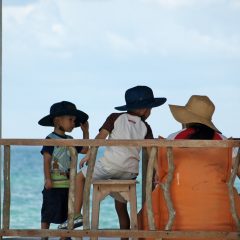 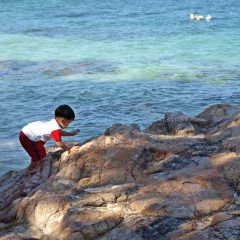 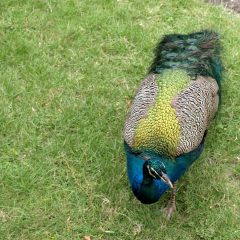 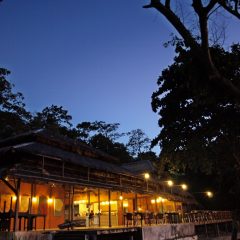